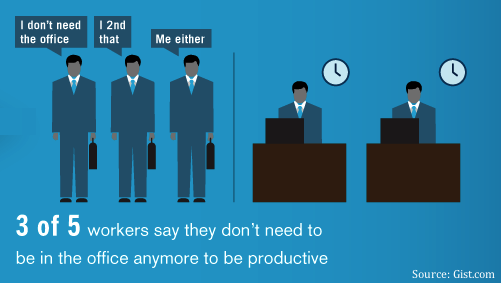 Recently, one of my friends suggested that the commercial real estate would die a slow death because of the rise of the mobile workers. I wondered if this could ever happen. My thoughts were not clear, tried to think using the same framework as the death of retail property. But it was different.

After much deliberation, I'm convinced that this is not going to happen. Not in our lifetimes, not in the next generation's or it may never happen at all.

But will the rise of mobile workers and virtual offices put pressure on the rental rates of the traditional commercial real estate? May be yes, but I don't think it will be significant.

Or may be large commercial spaces lease with fixed terms will become obsolete. It will be replaced by smaller offices with high value services, such as VOIP, cloud computing, videoconferencing, meeting rooms with hi-tech monitors, and presentation centers.

Or simply we will see more flexible occupancy plans for large commercial spaces, available space will be used more efficiently with higher turnover. We may also see lower numbers for new commercial construction.

To be honest, I don't know how the rise of mobile workers and virtual offices will impact commercial real estate.

An infographic on Gist claims that 3 of 5 workers say they don't need an office scape anymore to be productive. I don't know what is the source of this data and what is the sample size, but if this is true the numbers are not very encouraging for the commercial real estate.

Historically, it has been observed that commercial vacancy rate closely follows unemployment numbers. However, virtual offices are experiencing growth even in a recessionary economy, and not just in the United States but also across globe. Apparently, the virtual offices may become the new commercial real estate.

What do you think, tell us in the comment section below.