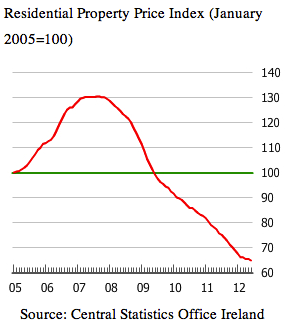 Residential property prices in Ireland have tumbled by more than 50 % since their peak in late 2007.

The data, which has been released by Eurostat for the first time, shows the extent of the property crash that followed the global financial crisis from 2008. Ireland has experienced one of the most severe property crashes among modern developed economies. It has been longer than a typical housing market downturn, marking its 5th year of falling prices in the year 2012.

A bursting of the property bubbles in Ireland, not only erased years of economic growth but left banks with billions of euros of bad loans and has pushed up unemployment to record levels.

But underscoring the sharp economic divergences across the euro zone, house prices fell only 4 percent overall in the bloc between their peak and the third quarter of 2012 because property has retained its value or risen in the wealthier, northern economies of Belgium, France and Germany.

In the most recent quarterly reading of the health of the residential property market, Eurostat said real estate prices in the 17 nations sharing the euro fell 2.5 % in July-to-September compared to the same period a year ago.

In Ireland, despite record low interest rates, consumers are reluctant to spend when unemployment is at a record high and as governments continue to cut spending to try to bring down their budget deficits.

The good news is that the property prices are no longer in free-fall, it is still falling but at a lower rate.

Also see What the Experts Predict for 2013 by Knight Frank. 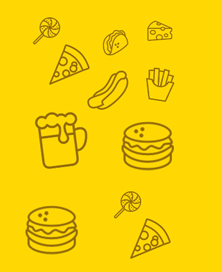